Guineas: Reasons To Love Them or Not 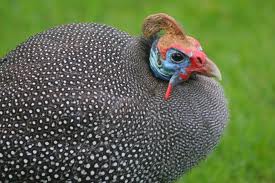 Guinea fowl undoubtedly spark more debates than any other barnyard poultry species. Some people love them, others despise them. What’s all the fuss about? Here are 8 great reasons to keep guineas, and 8 reasons to think twice before making the decision.

1. Guineas eat ticks and other insects. They are effective because they hunt cooperatively, but only when they are free to roam, which they will do if they are not closely confined.

2. They keep snakes away. Their busy activity and constant chattering deters snakes, and if a snake does happen to wander by, the guineas will rip it to pieces.

3. They discourage predators. Another group effort is mob attacking foxes and other intruders. They will also sound a warning against skulking two-legged intruders.

4. They have a high fertility rate. About half of all baby guineas, or keets, are cocks, which works out fine, because (unlike chickens) guinea fowl typically mate in pairs.

5. They are easy keepers. As active foragers, they find most of what they eat in the form of insects and succulent greens. They also rarely get sick or have any other health issues.

6. They produce tasty eggs and meat. Their small eggs are rich and flavorful, and the meat of young guinea fowl has been favorably compared to that of pheasant.

7. They have beautiful feathers. Pearl guineas, and some of the other color varieties, have spotted feathers that are fabulous for making jewelry and all kinds of other crafts.

8. They’re fun to watch. Their constant activity provides endless entertainment. And they make a great conversation starter with visitors who ask, “What are those — turkeys?”

1. Guineas are noisy. Their racket is undoubtedly the single most obnoxious thing about these birds, making them entirely unsuitable where unsympathetic neighbors live nearby.

2.They are difficult to tame. Pet guinea fowl are rare. Because guineas retain most of their natural wild instincts, taming one takes a considerable amount of time and patience.

3. They tear up the garden. Guineas don’t scratch quite as much as chickens do, but they love to dust bathe in loose soil — and where better to find it than in a garden?

4. They can be belligerent. They chase and peck other barnyard birds, and even each other. Growing guineas introduced into a flock of mature ones are likely to get run off.

5. They have a high attrition rate. Guineas like to roost in trees, where they can get picked off by owls, and the hens nest in tall grass, where they easily fall victim to predators.

6. They like to roam. On their daily rounds they will travel as much as a quarter mile from home base, perhaps ending up destroying the neighbor’s garden or scaring livestock.

7. They make lousy parents. They fiercely protect their young from intruders, but they also commonly lose little ones that can’t keep pace or get chilled in dew-covered grass.

8. They don’t like to be moved. Guineas will usually remain at the place where they were raised, but rarely stay when relocated, unless they are first confined for several months.

Because they don’t take kindly to being transplanted, if you do decide to get guineas, start with young ones, preferably still at the brooder stage. When possible, raise them with a few chicks, which will help calm the keets. And, when the birds are moved from the brooder to the coop, the guineas most likely will take a cue from the chickens and safely roost indoors for the night.