Why its important to have cattle supplements 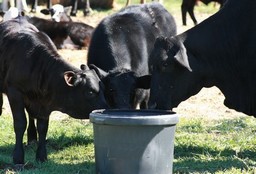 Having nutritional supplements always available for your cattle to utilize during critical times, can pay dividends.

Not meeting nutritional requirements of heifers and cows during the last third of pregnancy and the first 60 days of lactation, for example, can cost producers great economic loss, according to an Ohio State University Extension Fact Sheet on winter supplementation of beef cows1.

“Breeding animals not fed properly during these stages of production can be expected to exhibit low birth-weight calves, poor conception rates, greater calf death loss, longer intervals between calving and re-breeding, and depressed weaning weights of calves.  “Maintaining an acceptable body condition score throughout the year will help to minimize these losses.”

Results of University of Nebraska research, reported in the Journal of Animal Science in 2007, showed that strategically supplementing cows with protein while grazing dormant winter range late gestation not only positively affects the cow, but has lasting affects on their heifer calves weight and reproductive performance.

The three-year Nebraska study showed that 88 percent of heifer calves from cows supplemented with protein during the last trimester achieved first-service pregnancy, compared with 45 percent of heifers out of cows that received no supplementation.

“Protein supplementation of cows grazing dormant Sandhills range during late gestation resulted in heifer progeny with increased body weight from weaning through 3 years of age,” the research showed. “Perhaps more importantly, heifers from protein-supplemented cows had greater pregnancy rates and were more likely to calve in the initial 21 days of their first calving season.”

Source material for this blog article was provided by Purina Mils, Inc. © 2008